I had high hopes from the start considering the series title uses profanity and they utilized that guy (Alex Lawther) from Black Mirror. Would this be an overly edgy teen drama? Fuck no, it’s a beautifully strange yet relatable coming of age series.  We’re taken on an intense ride through the minds of two obnoxious, but wildly entertaining characters. And by the end, you might just have a nugget of empathy for a psychopathic murderer.

In an era where female protagonists are often devoid of depth, Jessica Barden destroyed that stereotype through her portrayal of Alyssa. Imagine a female character driven by more than a love interest who isn’t presented as a model. Not to mention that the acting of both Barden and Lawther is leagues above many adult actors and certainly on a top tier for millennials.

Top productions sink hundreds of thousands in promotional marketing. What a gorgeous surprise that a simple Netflix “you might like” email led to four hours of an unexpected binge watch session. 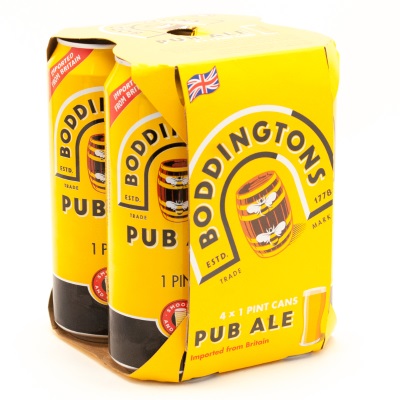 I’m quite partial to storytelling that portrays real people. Modern Family is chock full of witty quips, but the lavish California set design makes it hard to see the characters as people with true struggles. As a result these characters are hard to give a fuck about and there’s less of an emotional impact for the viewer. What a relief to turn on The End Of The F***ing World and to be greeted with home interiors that mimic seemingly normal middle class Brits.

That’s why we’re pairing a down to earth ale with The End Of The F***ing World: Boddington’s Pub Ale. It’s not fussy, it comes in 4 packs, and it has a little ball inside the can (widget) to mimic the pour of a draft. It pairs well with the gritty English setting, the smell of rampant hopelessness felt by our protagonists, and is probably something Alyssa’s creepy stepfather would drink to feel sophisticated. A four pack should be the perfect pacing to get you through all eight episodes, but we won’t judge if you buy an extra pack.

|From the brewery| Boddingtons a medium-bodied English pale ale renowned for its golden color, distinctive creamy head, smooth body and easy drinking character. It has a creamy, malty and slightly sweet flavor and features a clean, pleasant aftertaste. In 1992, Boddingtons introduced the widget can and was one of the first beers to use this technology. When Boddingtons is canned, the combination of the carbon dioxide and nitrogen needed to create the head of the beer is less than ideal. The Draught Flow System inside of the widget can consists of a plastic, nitrogen-filled ball or widget that helps the carbon dioxide already dissolved in the beer form additional tiny bubbles. This keeps the head stable and makes the beer as close to a draught brew as possible.

This site uses Akismet to reduce spam. Learn how your comment data is processed.