If Steve Brule and Stranger Things had a lovechild you’d have the socially awkward acting and deep nostalgic atmosphere of Everything Sucks! The series struggles to find a clear tone until a few episodes into the show’s ten episode premiere run, but once it gets rolling, it’s a fast binge-watch until the end.

We get 90s fashion, cheesy moments, and musical juggernauts like Oasis, Weezer, and Ace of Base (where they seem to have placed the majority of the budget).

My issue with the show is that it feels like a carefully created sentimental bomb. I wish that the writers spent as much time crafting an original plot as they did on the setting. Part of Stranger Things’ allure is its strong ’80s atmosphere, but it also has a unique and captivating story. We don’t get a moving story in Everything Sucks! until episode 9.

Another issue is that Everything Sucks! feels clearly written by writers in 2017. In 1996 society wasn’t as woke, even 30 minutes outside of Portland.

By the end, the majority of the actors found their stride; we have a concise plot to follow and  there’s a good amount of character development – even if it starts to get predictable.

What’s weird about this show is that it’s not immediately captivating or clear to the viewer and it seems as if the production staff was unclear with their direction until the halfway point. Fortunately, the portrayal of Luke and Kate is strong from the get-go because otherwise there’s no way you’d keep watching.

Everything Sucks! is a cringe inducing show that reminds me of all the shitty decisions I made in high school, like pounding cheap vodka. It’s such a strange watch that Everything Sucks!’ perfect accompaniment is shots of vodka. 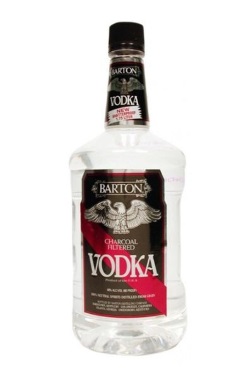 In high school we’d drink a brand of vodka called Barton’s which was loving referred to as the “devil’s juice” by my friend’s “cool” older brother who procured it for us. Barton’s highlights include waking up with a mouth as dry as the Sahara, throwing up once you realize it taste fucking disgusting, and making some of your worst life decisions – like getting into a Jeep with 6 other people and letting a drunk 18 year-old spin around doing donuts on a deserted suburban road at 2 in the morning. At least I know that’s incredibly dangerous, irresponsible, and selfish now – right?

It’s a miracle so many of us survive to adulthood.

In my early 20s my in-laws would love to take us to a pub called Barton’s. Real life can have coincidences too. I didn’t jump into the back of a Jeep with a drunk driver, but let’s just say learning that shots are not for me is an ongoing life lesson. Just like the tedious development of Everything Sucks!, someday I’ll get to that enlightenment, even if it takes me until my episode 9 to get there.

This site uses Akismet to reduce spam. Learn how your comment data is processed.